Research presented at the 2022 American Society of Clinical Oncology (ASCO) Annual Meeting exploring a standardized method of assessing measurable residual disease (MRD) prior to allogeneic hematopoietic stem cell transplantation (HCT) in patients with acute myeloid leukemia (AML). This CIBMTR® (Center for International Blood and Marrow Transplant Research®) study in collaboration with the National Heart Lung and Blood Institute found that next-generation sequencing based MRD testing (NGS-MRD) pre-transplant can identify AML patients in first complete remission (CR1) at high risk of subsequent relapse. In addition, reduced-intensity conditioning (RIC) was associated with higher risk of relapse in those testing NGS-MRD positive. The study is the largest cohort of AML NGS-MRD testing prior to allogeneic HCT, providing valuable insight into MRD as a prognostic tool to inform HCT decisions and individualize treatment to improve outcomes.

MRD prior to allogeneic HCT has been previously associated with increased relapse and death in patients with AML in complete remission. This study team recently demonstrated that AML MRD detected in pre-transplant blood by DNA sequencing was associated with increased relapse and decreased overall survival in patients randomized to RIC versus myeloablative conditioning (MAC) (Hourigan, 2020). However, the clinical utility of such ultra-deep NGS-MRD had not yet been reported in a large multi-center cohort or compared with standard clinical MRD testing.

Patients age 18 or older who underwent their first allogeneic HCT between 2013-2017 for AML in their CR1 and had FLT3, NPM1, IDH1, IDH2 or a Kit mutation at diagnosis were eligible for inclusion in this study cohort. They also had a pre-transplant remission blood sample available from the CIBMTR repository. The total number of patients with a blood sample available, sufficient information on their mutational profile of AML and DNA for analysis were 448 out of 457 total patients. Of the 448 patients, 33% experienced relapse at approximately five months post-transplant. Central NGS-MRD testing performed on pre-transplant blood samples was positive in 29% of patient samples. Testing positive by central NGS-MRD prior to allogeneic HCT was associated with lower relapse-free survival (36% at 3 years compared to 56% in those testing negative). The impact of detectable NGS-MRD was also modified by conditioning intensity: NGS-MRD positive patients receiving RIC had the highest relapse, 57% at 3 years, while those testing negative followed by RIC had the same relapse rate (35% at 3 years) as those who tested positive and received MAC. The figures below represent survival probability (Figure 1), transplant-related mortality (TRM), and relapse trends over time (Figure 2).

The National Marrow Donor Program® (NMDP)/Be The Match® alongside CIBMTR is committed to ensuring that patients thrive following transplant. Development of standardized approaches for monitoring MRD before and after HCT for AML will support a personalized approach to treatment with the best chance of success. In this case, the study team used highly sensitive NGS techniques at a centralized laboratory to determine if patients had MRD before transplant and 29% of patients were found to have MRD that wouldn’t have been detected by conventional testing methods. MRD is associated with lower rates of relapse-free survival. Detecting MRD before transplant helps transplant teams identify patients at greater risk of relapse. Transplant teams could alter the treatment plan for those patients to give them the best possible chance of optimal outcomes but more research is needed to make concrete recommendations. 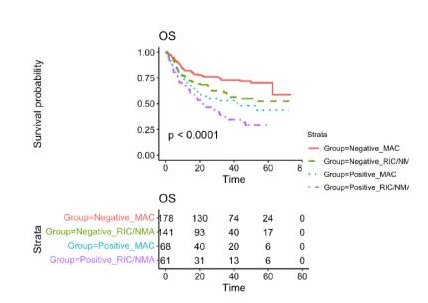 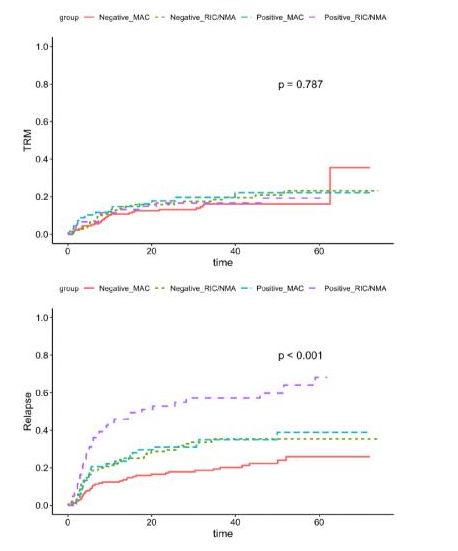