Advances in HCT Over Time

In this three-part Advances in HCT Over Time episode, our expert guests discuss the current state of hematopoietic cell transplant (HCT) science by exploring the evolution of HCT.

Dr. Appelbaum has been a transplant physician at Fred Hutchinson Cancer Center in Seattle, Washington, since 1978, working alongside Dr. E. Donnall Thomas and the pioneers of bone marrow transplant. Dr. Appelbaum studies the biology and treatment of leukemias, lymphomas and other blood cancers. He continues treating patients today.

As an Executive Vice President and Deputy Director at Fred Hutch, he now leads Fred Hutch’s Adult Leukemia Research Center, as well as the Hematologic Malignancy Program of the Fred Hutchinson/University of Washington Cancer Consortium.

Dr. Bellomo graduated from Robert Wood Johnson Medical School in 2006, where she then completed her internal medicine residency, chief residency and hematology/oncology fellowship. After completing her fellowship in 2013, she moved to Albany, N.Y., to join New York Oncology Hematology as a dedicated hematologist.

She serves as their Autologous Stem Cell Director and Cellular Therapy Lead in Hematology. She also chairs the Cancer Committee for Albany Medical Center and is an Emerging Cellular Therapy Innovator for Hem/Onc Today.

In part one of this episode series, Dr. Appelbaum and Dr. Bellomo examine what HCT looked like when they first started practicing compared to what it is today.

This is a particularly interesting discussion because Dr. Appelbaum has been practicing since the birth of unrelated donor HCT. He worked alongside Dr. E. Donnall Thomas, who was a Nobel Prize winner for his contributions to the field.

The history of HCT

Dr. Appelbaum openly discussed the history of transplantation in a previous interview with Fred Hutch, and he has written numerous historical perspectives on the topic.

In fact, Dr. Appelbaum was so captivated that he too became a pioneer in the field, publishing a paper marking the first successful autologous transplants in 1977 in patients with Birkin’s lymphoma.

In a paper published in the New England Journal of Medicine and a follow up published in the Annals of Internal Medicine, three points in time a decade each apart (1993-1997, 2003-2007 and 2013-2017) showed significant drops in non-relapse mortality after allogeneic HCT, from about 30% to about 15% and finally to less than 10%. This was largely attributed to advances made in less fungal disease, viral disease and GVHD.

The discussion goes on to cover major barriers in access to HCT, including psychosocial barriers and financial toxicity.

However, Dr. Bellomo and Dr. Appelbaum also explain the many ways that access to transplant has improved over time. This includes the importance of telehealth in expanding access to HCT consultation and supporting coordinated care between transplant teams and hematology/oncology practices.

Dr. Appelbaum and Dr. Bellomo discuss patient age in particular as no longer being a barrier for HCT given the advances in GHVD prophylaxis and less intense preparative regimens (e.g., reduced intensity or nonmyeloablative conditioning).

They mention further exploration into chemotherapy regimens, including a national clinical trial comparing conventional induction chemotherapy (7+3 regimen or liposomal daunorubicin and cytarabine) to a combination of venetoclax and azacitidine.

They also discuss measurable (or minimal) residual disease (MRD) status, with the recommendation given to refer early and often for consultation without waiting for complete MRD negativity.

In part two of this episode series, Dr. Appelbaum and Dr. Bellomo discuss how the birth of the NMDP/Be The Match has completely changed donor availability and expanded access to HCT. They also discuss considering alternative graft sources and donor selection, including mismatched unrelated and haploidentical donors.

Dr. Appelbaum told the fascinating story of the first unrelated donor HCT ever conducted for a leukemia patient, performed at Fred Hutch. Physicians performed the transplant in 1979 when previously, only identical twins and matched siblings were considered acceptable donors for HCT. This limited transplant to less than a third of the patients who needed it. 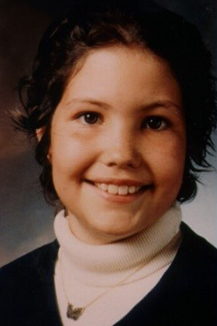 Laura Graves received the first ever bone marrow transplant for a leukemia patient from an unrelated donor in 1979.

Dr. Appelbaum tells the story of Laura Graves, daughter of Bob Graves and the first successful unrelated donor transplant for a leukemia patient.

He also introduces Elmo Zumwalt III and his transplant story (told in a book called “My Father, My Son”), and how the Admiral Elmo Zumwalt Jr., Bob Graves, and E. Donnall Thomas, MD, came together to secure funding from the Navy to help form the beginnings of the NMDP/Be The Match. Dr. Appelbaum and Dr. Bellomo celebrate the altruism of donors on the Be The Match Registry®, with both emphatically sharing the beauty of watching HCT survivors meet their donors.

The discussion is truly inspiring and includes examples of highly successful donor drives, such as for Allison Atlas, that have helped expand the registry greatly over the years to become what it is today.

They also discuss HLA Today as a program that has helped improve access to HCT and provide quicker connections to assessing donor availability.

Dr. Appelbaum and Dr. Bellomo go on to discuss that now with unrelated donors, cord blood units, and haploidentical donor options, donor availability has progressed to the point where donors can be found for essentially all those in need of HCT. They briefly talk about advances in mismatched unrelated donor HCT, and Dr. Appelbaum discusses Fred Hutch’s methods for choosing a stem cell source for their HCT patients (the NMDP/Be The Match also publishes Donor and Cord Blood Unit Selection Guidelines).

As Dr. Appelbaum and Dr. Bellomo attest, the practice of medicine dictates that different transplant centers will have different preferences on the best stem cell or graft source, and that there is no right or wrong answer based on personal experience and training.

Dr. Appelbaum expresses great gratitude in having Effie Petersdorf, MD, at Fred Hutch to study HLA typing and outcomes based on graft sources, and mentions a study from Filippo Milano, MD, on cord blood transplants in patients with minimal residual disease as pertinent ongoing research into alternative graft sources.

In the final part of this episode series, Dr. Appelbaum and Dr. Bellomo discuss the biggest gaps and misperceptions that still exist among physicians, and how coordinated care and open communication between transplant centers and hematology/oncology practices can help. They also look forward at the future of HCT, including the integration of CAR-T and other emerging cell therapies.

Understanding when, who and how to refer for a transplant consultation

Dr. Appelbaum and Dr. Bellomo agree that one of the most persistent misconceptions among physicians is simply when, who and how to refer for a transplant consultation. Though HCT eligibility guidelines are frequently referenced among physicians, the amount of information that hematology/oncology practitioners must sift through in order to determine eligibility for their patient is often large and overwhelming, and the guidelines continue to evolve with new advances in the field.

The door is closed to HCT too early and too often for a number of reasons, including patient age, interpretation of unclear genetic markers, or other co-morbidities and barriers. That is why both Dr. Bellomo and Dr. Appelbaum stress the importance of just referring for a consultation early and often so that transplant specialists and a team of individuals at the transplant center can formally determine eligibility.

To help with this determination, the NMDP/Be The Match jointly develops Transplant Consultation Timing Guidelines with the American Society for Transplantation and Cellular Therapy (ASTCT) based on current clinical practice, medical literature, National Comprehensive Cancer Network© (NCCN) Guidelines for the treatment of cancer, and evidence-based reviews. These guidelines are available online, as a PDF or in a mobile app. 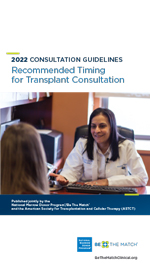 Dr. Bellomo and Dr. Appelbaum also stress the importance of open dialogue and communication between transplant physicians and hematologists/oncologists to improve overall patient outcomes. Building these relationships helps increase access to HCT, build confidence in the HCT process on both sides of the relationship, and ultimately gives the patient more life-saving options. The more physicians on both sides can share information with each other in real time, the better.

Emerging advances and treatment options for the future of HCT

Dr. Appelbaum and Dr. Bellomo continue to discuss exciting advances in HCT and the future of transplant. They mention disease recurrence and chronic GVHD as the two largest barriers to HCT right now, with ongoing advances on both fronts.

Dr. Appelbaum continues to express excitement for how CAR-T can be used on its own or can be incorporated into transplant regimens, making it clear that these therapies are not at war with each other. Dr. Bellomo agrees that the use of CAR-T in the future can give more treatment options to patients, but we can find ways to integrate them for even better results.

He also mentions a “mind blowing” gene therapy currently licensed in Europe with the potential to cure thalassemia. Finally, Dr. Appelbaum discusses his upcoming book on the history of transplant through the Mayo Clinic Press, which will be a combination of the story of how transplant came to be, along with a biography of Dr. E. Donnall Thomas. There is no publication date yet, but the NMDP/Be The Match will be sure to update podcast listeners.